A team of girls, weapons and a coach, the story begins…

As far as the introduction goes, the studio has pulled out all the stops, there’s an AAA video and during downloading, we are introduced to the characters, tips and objects, and an important point is that this is all uncensored.

Water games competitions are very popular and all the girls dream of being the star of this pretty dirty game, which works out well for you, as you’ve been asked to coach a team of a dozen or so girls. As trainer, of course you will have certain privileges,with one-on-one sessions which feature quite a lot of sex.

Each girl has her own story, and it’s up to you to build a bond to get to know them all. Akane, Yui, Saki, Rina, Kana and the others are prepared to get their costumes wet for the team, and they’re prepared to do a whole lot more besides.

Then the game puts you in a tutorial, where you embody Akane, in her short but effective uniform, and you are taken through all the basic moves of the game (Move with the pad on the left, attack and fire with the buttons on the right).

You can soon see what you’ve got yourself into, a game where a team of cheeky girls in bikinis are going to squirt water using their “weapons” - water pistols, nerf guns, and other crazy weapons. Pistols, water guns, water bombs and many more.

Ok, so a shooting game on your mobile with sexy stories, but how do you play it?

Simple and effective are the key words, and even though less powerful phones/ tablets may experience some slow passages, all you need for the action parts are two thumbs, one to move and one to aim/ fire, and it only takes a few minutes to understand how it works. You play the games on a little map which is suitable for 3 VS 3 in multiplayer mode, the rhythm is right, and you you’ll be able to enjoy game after game.

You’ll be rewarded for any games you win with play money and gifts. The game also lets you achieve objectives which will unblock content (new skins, new members, new training sessions). Aim for victory, but also for the MVP title, and you will win even bigger.

In brief, girls in bikinis spraying each other with water, the girls’ dormitories, something tells me that titties are going to make an appearance…

Oh yes, indeed, after having used your thumbs to collect objects, time to go to the dormitory, which is where all the sex happens. Give your team gifts and get closer to them.

Get to know each member, you will be introduced to them all through a really well-drawn visual novel system, until you unblock sex scenes where you are the hero..

And one other thing, personal training sessions will allow you to improve each girl’s stats, and then you’ll be holding all the aces. And of course, during these training sessions you can enjoy each girl’s unique charm, and they’ll be asking you for mercy and stripping off, so you can shamelessly check them out from all angles and even take photos of them.

The studio has done some really good work both on character design and on the costumes and the backgrounds. And that is the case both in the competition parts and in the dorms.

In the visual novel part, the girls are very pretty, kinky in their preferences and the settings are varied.

The music is very catchy and the sound effects and voices are good too, exactly what you would expect in this kind of game.

Really good during the game, the characters are animated really well, and so are the attacks and the weapons, and as for the dorms and the girls’ stories, you’re in the visual novel mode, the girls are really good to look at when they’re moving around.

Online gaming required, the features of the multiplayer aspect are presented really well, you can choose partners (unblocked after a certain level), add friends to try to win more games and discuss with members of the community with the online chat.

A huge amount of content (characters, story, weapons etc.) and a multi-player game which will keep you enthralled for a really long time.

Some facts and figures

A really good game, which moves from multi-player action to narration very smoothly, you can spend time shooting your opponents or in the dorms, enjoying your team, spoiling the girls, getting to know them, and of course, ending up doing them as well. The content is absolutely cast and will give you hours of play. And, getting used to play on mobiles is very easy for all aspects of the game. A few little negative points, but nothing that spoils the fun of the game. 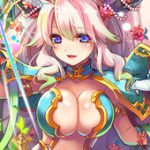 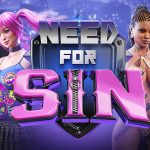